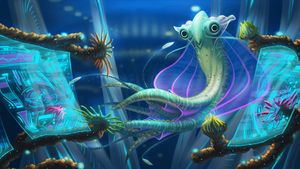 Mu'Kay are a race in Star Control: Origins. Their homeworld is Mu'Kayaan located in the Beta Pavo system.

Governed by the Abyssal Council, the Mu'Kay are a peaceful race of squishy squids that has learned to live in harmony and peace with all living species (except for the fish, they really like the fish). After learning of a world beyond their beloved oceans, they have developed space technology and reached for the stars. Their Inkpod Commanders have prowled the void, seeking out other races to peacefully coexist with and/or observe, without interference.

Problem is, the Scryve Empire took note of them and decided to peacefully oppress them and use for their own ends. The Mu'Kay are not particularly fond of it and their Federation of Allied Species, representing the Mu'Kay and other associated species (of which there are none), is an attempt to forge an alternative... Though the fear of getting stepped on and into the ocean floor does not appeal to them, so they do not market it, speak of it too openly, and definitely do not mention it in the presence of the Scryve.

The following achievements are related to the Mu'Kay: